HOW I BOOKED TWO BUSINESS CLASS SEATS TO PARIS

I still can’t believe I managed to pull this off. I knew I wanted to book two business class tickets for myself and The Boyfriend over the Christmas – New Years week. I had been looking at Spain, Eastern Europe and France, but by the time I had accumulated close to enough miles, availability was scant. So Spain was out.

I also had to juggle two different frequent flyer accounts. I wanted to book one ticket from my U.S. Airways account and one ticket from my United account. I needed 100,000 miles in each account, and I had to make sure The Boyfriend and I ended up on the same Star Alliance flight. Plus, there was the slight problem that I was waiting on 50,000 miles to post to my United account from my latest MileagePlus Explorer card.

Here’s is the detailed step-by-step process.

Step #2: I kept track of all our flight options with a detailed chart that should impress even the most organized travel planner. 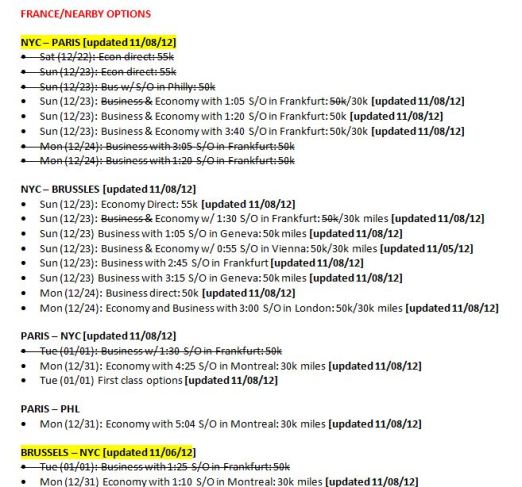 Step #3: Last Friday, I call U.S. Airways (you can’t book partner award flights on their website) and asked about flights to Paris. The agent told me she had nothing, even though I was staring at a ton of award availability on United’s website. So I hung up.

Step #4: I called back an hour later and got another agent who found a couple of flight options to Paris. We couldn’t find anything for the return flight so I booked a return flight from Frankfurt (a 3.5 hour train trip from Paris) and put the business class ticket on hold. U.S. Airways allows you to put award tickets on hold for three days.

Step #5: At the same time, I put the same flights on hold through United’s website. Since I did not yet have enough miles to book the flight, United allowed me to hold the award. I then called United and asked them to extend my hold from one day to three days. They agreed. Score!

Step #6: On Sunday, I called Chase and asked them when my 50,000 bonus miles would post. They said soon. Hmmm. Not so helpful.

Step #7: Feeling reasonably confident that my United points would indeed post “soon,” I called U.S. Airways back Sunday night. Correction: I called U.S. Airways about six times trying to find a better flight to Paris with a shorter stopover (which I found) and a return flight from Brussels. Brussels is only an hour from Paris by train and a city we both want to see. Finally, finally I found an agent who found the flights I wanted and I booked them.

Step #8: At the same time, I put a hold on these new flights on United’s website.

Step #9: I then transferred 20,000 points from my Chase Sapphire Preferred account to my United account and booked the flight to Paris for myself on United’s site. Unlike U.S. Airways, United allows you to book one-way award tickets. At that point I had 786 miles left in my United account.

Step #10: I called United and asked them to extend the hold on my new return flight from Brussels, which they did. Score again!

Step #11: Over the next three days, I checked Award Wallet every half an hour to see if my 50,000 United miles had posted. They had not.

Step #13: I put a hold on another return flight from Brussels in case the miles didn’t post by the time the first hold expired.

Step #15: I jumped up and down and rejoiced. My miles posted Wednesday night. Huzzah!

Step #16: I booked the return flight from Brussels and canceled all the other held reservations.

And that is how I booked two business class seats to Paris for less than $400 – which included taxes and fees on the award flights and the cost of acquiring the extra U.S. Airway miles. Totally worth it.