I picked the Hilton Berlin for two reasons: 1) Location and 2) my Hilton diamond status.

As you can see, I was pretty happy with our stay at Hilton Berlin.

The traveling circus is off to Europe again in two weeks, making this our third trip to Europe this year. Not that I’m complaining.

This trip began like a lot of our trips: me playing around on the computer, randomly looking up flights, and saying “Hey babe, you want to go to Berlin?”

Basically, there was a ton of United award availability to central Europe and we had replenished our points accounts since Amsterdam. So Berlin, Prague, and Vienna – here we come.

How did we do it?

Flights: I splurged on business class tickets to Berlin in the hopes that we will arrive well-rested and can hit the ground running (fingers crossed). We will fly United Polaris (sadly not the fancy new United hard product) to Berlin with a stopover in Dublin. There are no direct flights from D.C. to Berlin, and flying United requires less miles than United partners like, say, Austrian Air. Total IAD – TXL for two people: 115,000 United miles and $16.80.

Hotel – Berlin: Picking hotel rooms is my favorite part of traveling. I know, some people like the sightseeing, the food…whatever. I love the hotel analysis. It takes all kinds, right? Since I have diamond status at Hilton, my heart always gravitates there, and I had racked up a ton of points thanks to work travel. Berlin was easy. The Hilton Berlin is smack in the middle of the city, with easy access to major sites. I booked five nights, taking advantage of Hilton’s five for the price of four deal. Total Hilton Berlin for five nights: 161,000 Hilton points.

UPDATE: I occasionally check on my already-booked hotels to see if prices have gone down. Lucky me, the Hilton Berlin was going for 139,000 points for the same five nights. I chatted Hilton and they immediately redeposited 22,000 points into my account!

Hotel – Prague: I had a free IHG night I needed to use before it expired in November so it made the Intercontinental Prague an easy pick. It’s not the best value for my free night, but it’s better than not using it all. In the end, because prices were relatively cheap, I paid for two nights with cash, one night with points, and one night with a free night award. Total Intercontinental Prague for four nights: 40,000 IHG points and $302.56.

The Intercontinental Prague in the city’s old town. Super excited about the location and the proximity to the Jewish sites.

Hotel Vienna: This was a tough one. Vienna hotel pries are more western Europe than eastern Europe, and we were fresh out of Hilton points. It came down to Starwood vs. Marriott. Starwood offered a slightly better location, but my gold status with Marriott gives us more bang for our buck. So I transferred a bunch of SPG points to Marriott at a 1:3 ratio and booked the Vienna Marriott, where we got five nights for the price of four. Total Vienna Marriott for five nights: 160,000 Marriott points. 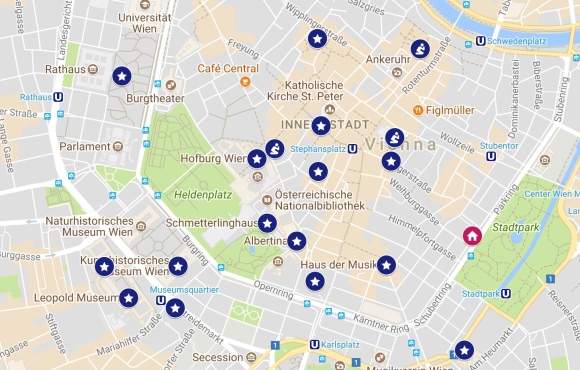 Most of the key attractions in Vienna are located inside or around the ring. The Marriott is directly on the ring road. Looking forward to the lounge here.

Trains: We booked two trains from Berlin to Prague and from Prague to Vienna. Thanks to Seat 61 (the best website for anyone attempting train travel), I was able to find cheap prices on the Czech Republic train site. Total Berlin – Prague for two people: $65.63. Total Prague – Vienna for two people: $53.72.

So that’s how you do two weeks in central Europe on the cheap without slumming it.

Ireland Part 7: Where We Stayed

Points will get you only so far in Ireland if you leave the major cities, so I tried to maximize our points staying options where I could.

With Mark and I being Hilton Diamond members, we chose The Morrison (DoubleTree) on the banks of the River Liffey for our single night in Dublin. When we checked in, I asked for my upgrade, and we were given a satisfactory room. Usually, I try to push for a luxurious suite, but with one short night in Dublin, I decided to save my pushiness for another time. 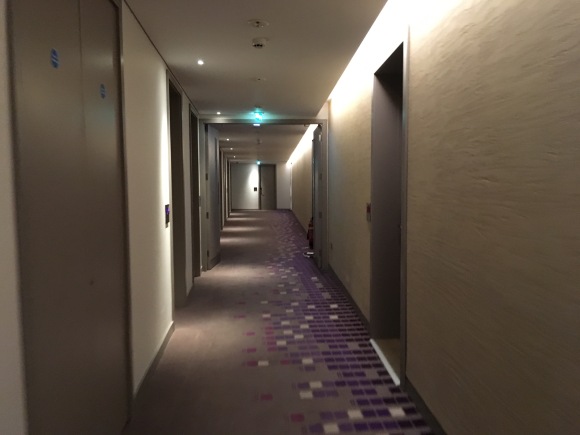 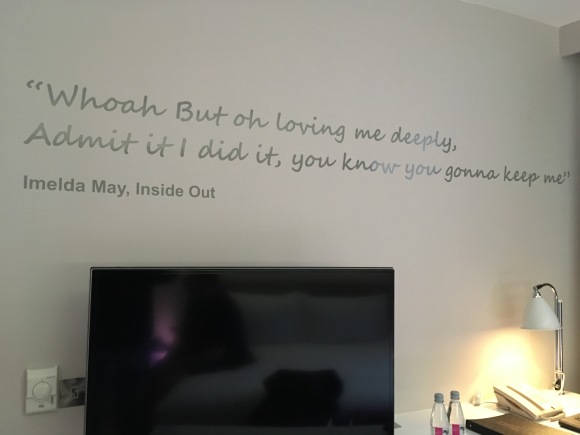 But then, Mark checked in to his room at 11 p.m., and they gave him the biggest ass suite I have ever seen in my life. I was more than a little jealous.

You walk into the suite, and there is a nice-size dining room and window seat.

Then, because that’s not enough, there’s a separate living room area with plenty of seating room. 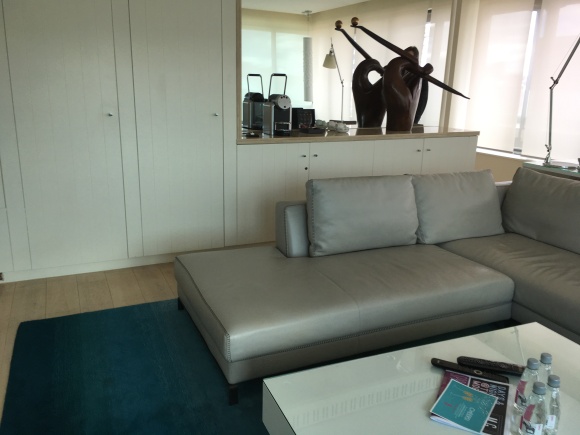 Oh, and there’s a wrap-around porch that offers views of the river. 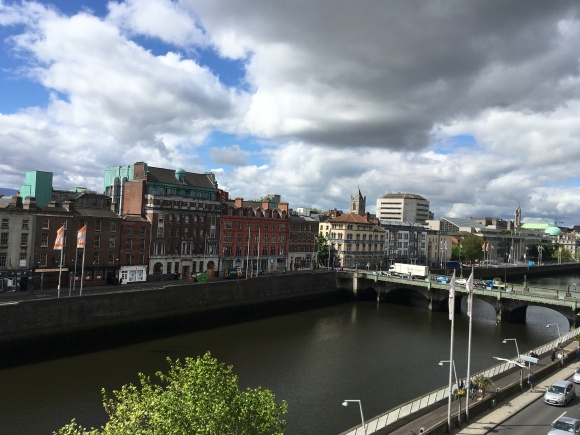 The bedroom is a separate room with another window seat.

The headboard is some kind of funky, multi-colored… something. There is actually a remote control to change the colors.

And the bathroom was bigger than our entire room. 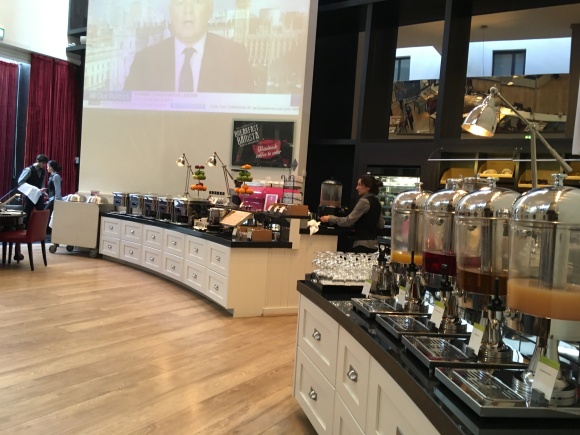 All in all, the DoubleTree was nice hotel in a good location with an impressive breakfast. For 50,000 points, we saved ourselves a couple hundred of dollars.

There are not many points hotels in Reykjavik. You have two Club Carlson options and two Hilton options. Hilton offers the older, cheaper Nordica and the newer, more expensive, and more centrally located Canopy. Since we were low on points after our December Spain trip, I was able to make the Nordica work for $71 and 16,000 points a night.

View from the lounge

Cons: A 30-minute walk from the center of town; lounge is on the small size. 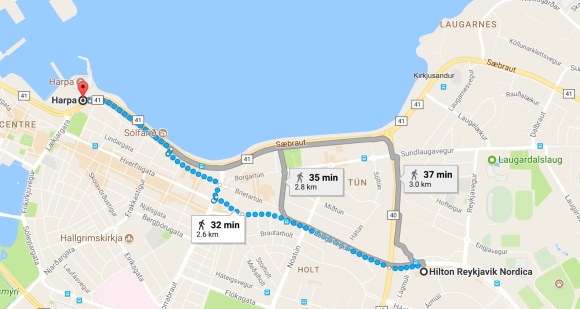 All in all, we were happy with our choice. The walk into town forced us to do quite a bit of walking and see more of the city. Our first day in Reykjavik, we walked more than seven miles! While the lounge was on the small side, it was still lovely to have access to free food and drinks (mmmm, diet coke), and the views were nothing to sneeze at. Finally, the free parking was useful once we rented our car. If you’re planning a trip to Reykjavik on points, the Hilton Nordica is a great way to keep costs down.

In less than a month, M and I embark for Spain. This is our first international trip together and M’s first business class experience. We’re both very excited to see all the traditional sights, but I’m also over-the-top excited about the hotels I booked.

I booked our Madrid hotel first. I knew I wanted lodging close to the Prado art museum in the center of the city. With its five nights for the price of four policy and central location, SPG was an obvious choice. It came down to choosing between the Westin Palace (category 5) and the The Principle Madrid (category 5). The Westin was 12,000 points a night while the The Principle was 16,000 (despite both being category 5 hotels) and M preferred the Westin’s traditional decor. I booked six nights at the Westin for 60,000 SPG points. 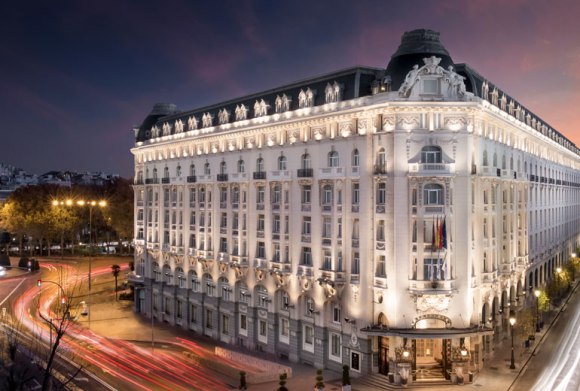 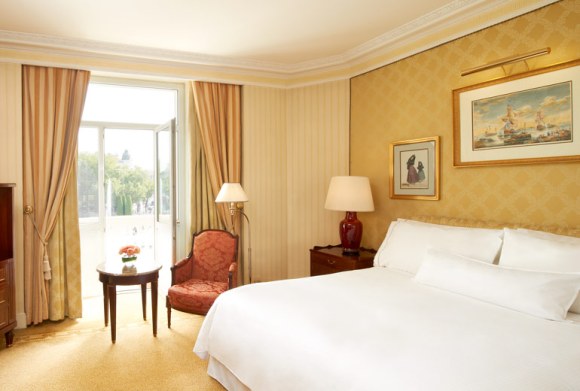 Next, I booked our single night in Granada. There is a dearth of points hotels in Granada so it came down to a choice between the Marriott’s AC Palacio De Santa Paula, Autograph Collection and non-points options. For 35,000 points, I splurged on the AC Palacio even though it’s a bit removed from the center of town. I’m even more excited about this decision now that I’ve achieved gold status with Marriott after completing a status challenge this fall. Turns out, there are some benefits to living out of three star hotels in suburban Pennsylvania. With gold status, we’ll get free breakfast and hopefully, a sweet upgrade. 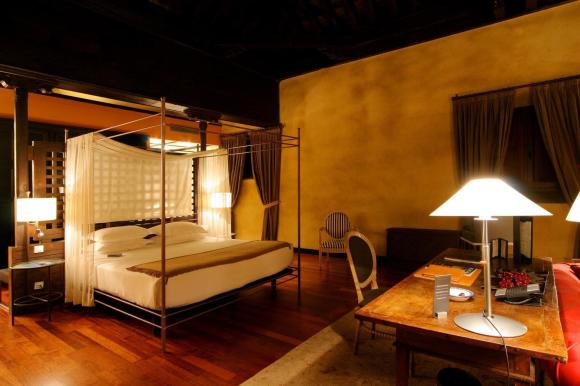 I’d love to get upgraded to this gorgeous suite.

Barcelona was my biggest dilemma. I was sitting on a nice pile of Hilton points, but the Hilton of my choice – the Alexandra Barcelona DoubleTree cost 50,000 points a night vs. 113 euros. That is not a great points per dollar value. In contrast, there are several good value Hiltons for 30,000 points a night, but they are farther from the center of town. Thus began the great debate of 2016:  Stay father away and save some of my points, fork over $600 for four nights at the DoubleTree, or bite the bullet and hand over 200,000 Hilton points. After much agonizing, I decided on the latter option. I love the idea of staying in the center of Barcelona and decided to save our money for other trip expenses. Plus, as a diamond Hilton member, hopefully we will score a nice upgrade. The DoubleTree boasts a couple of spacious suites that will make my day.

Seville has no points hotels in the old quarter where we want to stay. Since we’re not traveling in peak season, there are many afforadable options. My major priority after location was space. While we’re not planning to spend a lot of time in our hotel, I hate walking into European hotel rooms that are essentially a box. Is it too much to ask for some space on either side of my bed? In the end, I settled on an apartment-style lodging that is affiliated with a nearby hotel. Apartamentos Murillo gives us 300+ square feet for two nights, and it’s a short stroll to the Royal Alcazar. 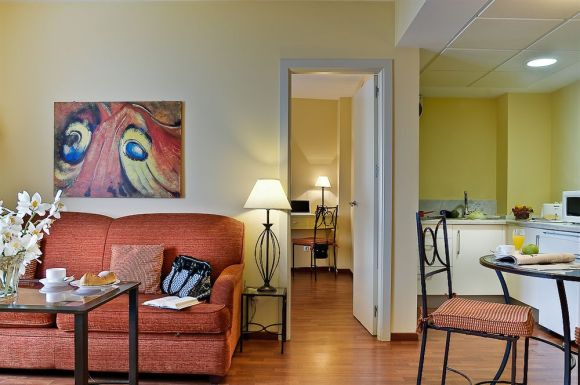 Cordoba was the least stressful decision. We will only be there for one night, and there are only a handful of decent options in our price range within the city walls. For $70, I booked Eurostars Conquistador, a four star hotel next door to Mezquita. 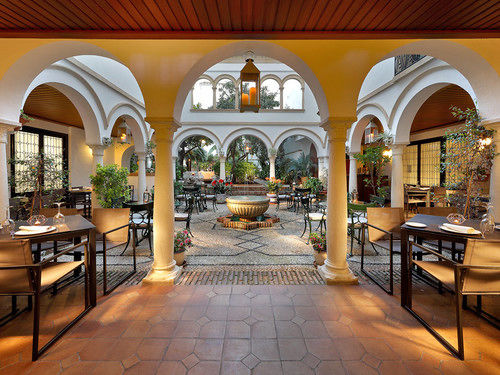 Part #2: The Joys of Hilton Gold

In case you missed it…

After arriving in Beijing, we took a cab to our hotel, the Hilton Beijing Wangfujing. At 40,000 points a night, it was not exactly a steal but I had the points and it turned out to be the best hotel of the trip. While Hilton has dramatically devalued it’s award system, it is one of the best hotel programs for gold status, which I have thanks to my Hilton Reserve credit card. Specifically, we were updated to a gorgeous, large suite-like room, had access to the lounge, and enjoyed free wifi.

First the room. It was amazing. It was very spacious with a massive walk-in closet which was itself the size of some hotel rooms. We had the largest bathtub I have ever seen in my life, and plenty of space for our stuff. 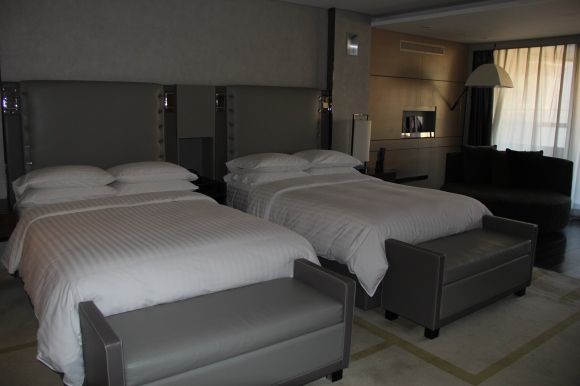 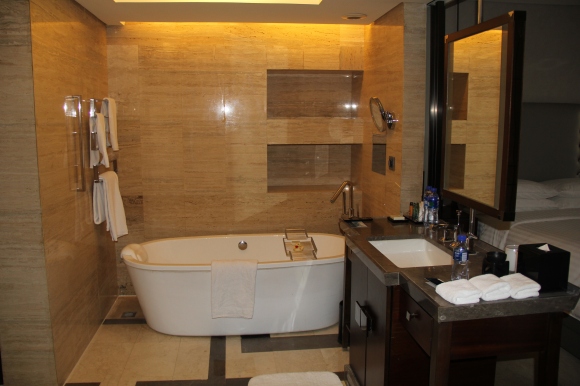 The lounge on the sixteenth floor was a treat, stocked round the clock with food and drinks, which for me, meant endless diet coke. 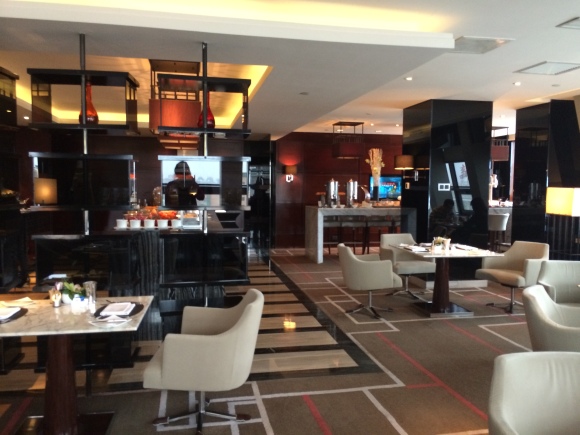 Concierge spoke a passable English and were extremely helpful, especially with booking our train tickets to Shanghai.

Finally, the location was perfect. Beijing is massive, so we had to travel to most sights, but we were located near two subway lines in the center of town, within walking distance of Tiananmen Square and the Forbidden City. There was also a mall just down the block with a supermarket in the basement when we need to restock on snacks and other paraphernalia. 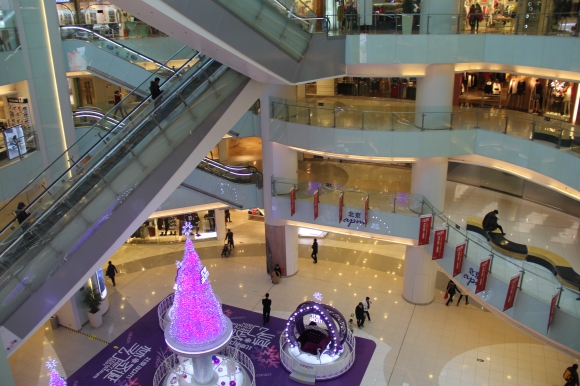 I have been down on the Hilton program since it was massively devalued, but this stay made me appreciate the good parts of Hilton HHonors. Yes, some hotel rooms will cost an exorbitant 80,000 points a night, but you can find cheaper options and Hilton points are relatively easy to earn. There are several Hilton branded credit cards, and there is a Hampton Inn in nearly every podunk town in America. And since I travel to a lot of podunk towns, I end up staying in a lot of Hampton Inns.