For the record, I’m not complaining. Just explaining.

Life got really busy, and I disappeared off the face of the earth, or, off the face of this blog. In my defense, I got married, and wedding planning is a form of modern torture right up there with makeup and high heels. I’m not sure why our gender imposes these hellacious rituals on ourselves. Again, not complaining – just explaining.

Thankfully, we survived the wedding planning, which leaves me convinced we can survive whatever life throws our way. You got nothing on us life – we’ve already endured tablecloth colors and seat arrangements!

So, while I owe my patient audience many posts about our winter trip to Spain, let’s review the biggest event of my life after the Cubs winning the World Series. 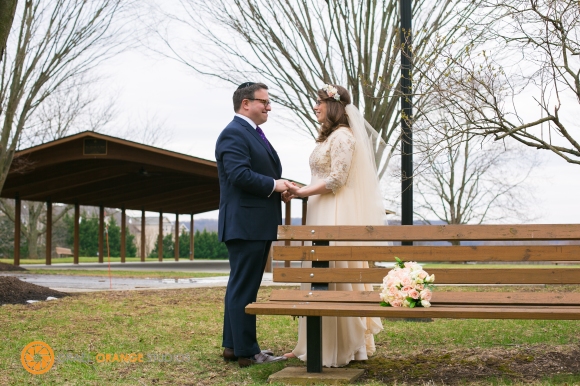 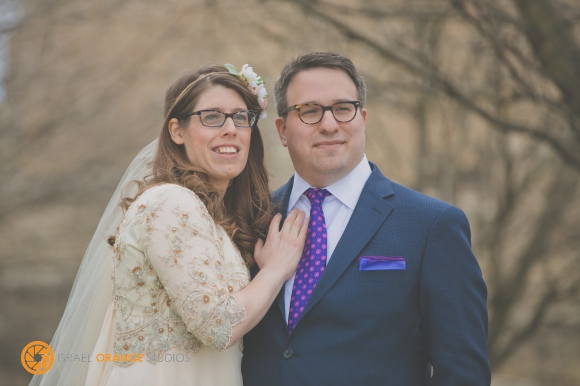 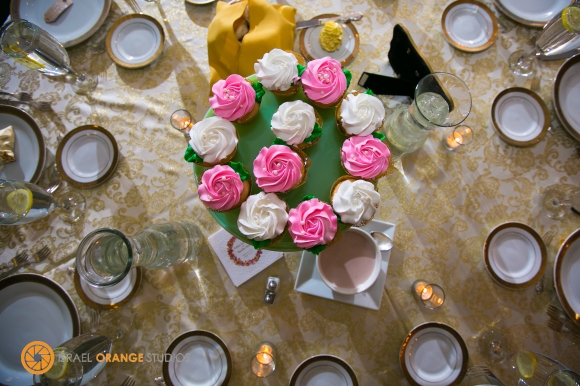 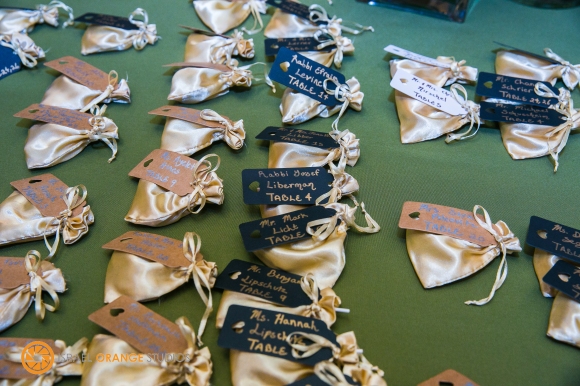 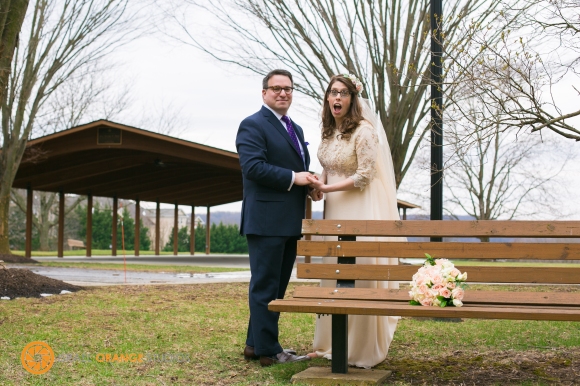 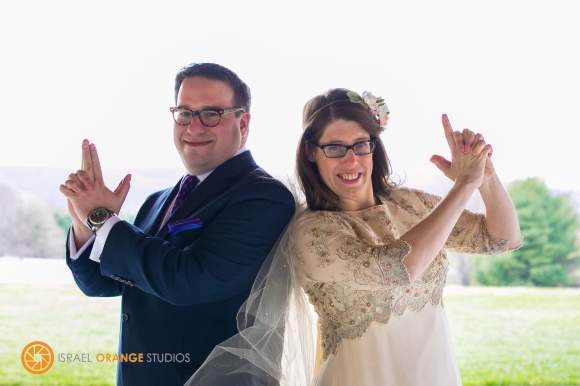 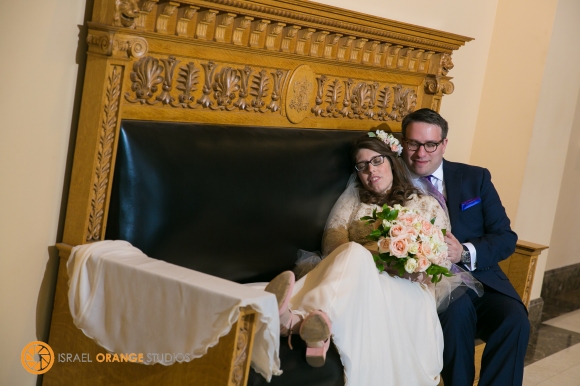 I am legitimately napping in this photo. Weddings are exhausting!

Six weeks after our wedding, people like to ask, “How is married life?” I tell them, “The best part about being married is we don’t have to plan the wedding anymore.” I am 80 percent joking.

Stay tuned for details on our upcoming trip to Iceland and Ireland. WHAT? Another trip? I know! Crazy.

This has been a year of miracles.

First, the Cubs won the World Series… after 108 years.

Then, all of our candidates won on election night (no, not Trump).

Then, I got engaged.

I know, crazy. Who believed the Cubs could actually pull it off?

In all seriousness, it’s been an exhausting, but a great year so far. Losing (in baseball and politics) sucks. And being single and doing the endless dating crawl sucks.

Dating is a crapshoot, and it often seemed like I was getting served a lot of crap and not so much of anything else.

I got lucky and met M. But before I got lucky, I went on bad dates, waited on ex-boyfriends, and despaired. I am, appropriately, a born and bred Cubs fan, of whom the famous Chicago writer Mike Royko once wrote: “A pessimists see the glass as half empty; a Cubs fan wonders when it’s gonna spill.”

Like the Cubs, I got my miracle. In a month, M and I are off to Spain. In a few months, we’ll get married. And we plan on having many more adventures, and hopefully, some more miracles along the way (Red Sox vs. Cubs World Series maybe???).

And in case, anyone doesn’t believe in miracles, I refer you to this definitive episode of How I Met Your Mother:

Crap, has it been a year already? 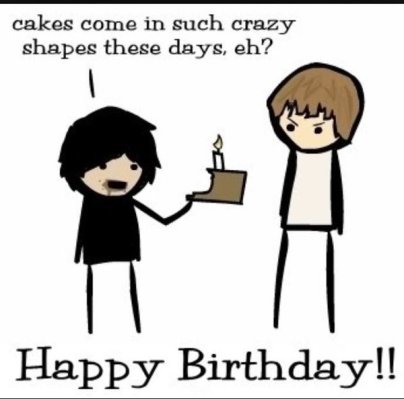 Here’s the one nice part about getting older. It is the only way for things to change. For wounds to heal, for memories to fade, for new people and opportunities to present themselves. This year came along when I desperately needed something in my life to change. So I am happy to be older, happy to look back on the past year and remember all the amazing, new things.

I am happily in a new relationship with the wonderful M. Most importantly, my almost-four-year-old niece has given M her imprimatur of approval. I literally traveled around the world to Vietnam with one of my best friends and added two new national parks to my list (Arches and Canyonlands) with my sister. Finally, I have a bunch of exciting trips to look forward to, from Spain to Cleveland to a potential trip to Cuba (!!!!). 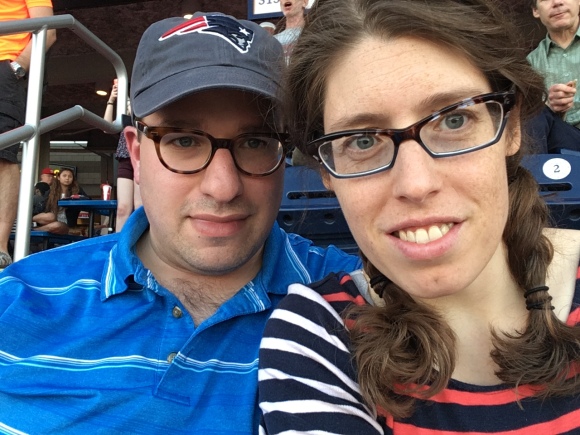 Our first baseball game together. Cubs vs. Nats. Cubs win! 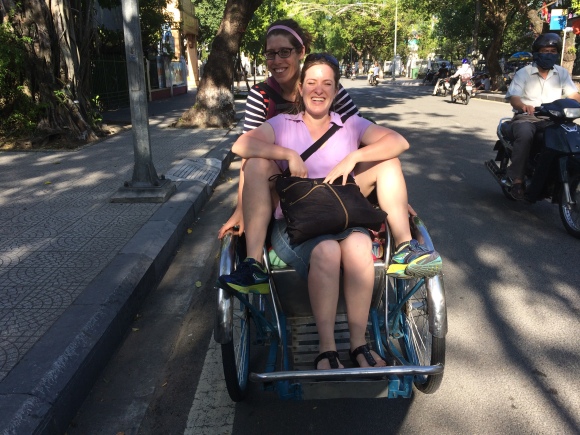 Lisa and I laughing it up in Vietnam.

Life is far from perfect. There are stressful, difficult, blah-filled days. Like every human being, I worry about mundane things and big life things. There are things I should worry about, but stupidly push them to the space in my head where thoughts magically disappear. I struggle to remind myself that I can’t control everything and everyone (though the world would be a better place if I could). But….I am affirmatively happy. It is amazing how one person can change so much. I am thankful for that gift every single day. And I am looking forward to the many things M and I plan to share together. Especially the end of this oppressive heat wave. Until then, I am ensconced in my woman cave and have no intention of leaving.

Here’s to another year. And here’s to me.

2015 hasn’t been the easiest year, but it’s been filled with a lot of good things, and I’ve come to realize that’s the key to surviving this world: Focus on the good, ignore the bad. And so here is the good: Two new nephews, new friends (and old), amazing trips, two new countries, and a newfound love of boxing. I’ve mastered the yoga headstand, started painting again, ran a 15K and didn’t die, and enjoyed many, many Facetime conversations and several visits with my adorably precocious three-year-old niece.

I expect 2016 to be pretty busy, but hopefully there will be a few trips in store for me. This year I’m focusing on jet-lag free countries. I want to hike a sputtering volcano in Guatemala and see the Atacama Desert in Chile. I just bought a book on Nicaragua, so who knows? Here’s to a kick-ass year.

6: Countries visited, including the U.S.

16,250: Number of Amtrak points purchased (the equivalent of four trips between DC and New York City).

AN ODE TO FRIENDSHIP

It was 1998. I was a terrified college freshman enrolling in an art class called Intro to Design, emphasis on the word Intro. I had no clue what I was doing. But at least there were two of us.

Lisa and I gravitated towards each other because everyone else in the class was drawing circles (and other shapes) around us. Wait – you want me to draw with dots? What the hell does an excited line look like? 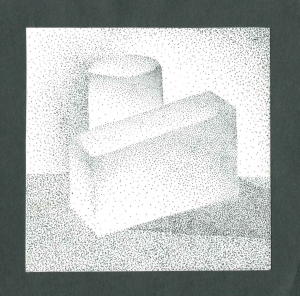 Thus, a beautiful friendship was born.

Many years and a bagillion birthday cards later, we still talk almost every day (texting counts as talking, right?) even though we haven’t lived in the same city since 2005. She’s the person I call when pretty much anything happens – big or small. Like: “Lisa, I only slept five hours last night.” “Lisa, I can do a headstand!” “Lisa, I spend too much on groceries.” “Lisa, I hate everyone.”

We’ve been to Croatia and Peru, and today we embark for Scotland. In a couple of months, we will circle the globe to Vietnam.

There’s a lot of things I would like to change about this fundamentally unfair world we live in, but this isn’t one of them. At the risk of being overly sentimental, I’m very lucky to have a friend I can literally and figuratively share the world with.

Off to Scotland, bitches! 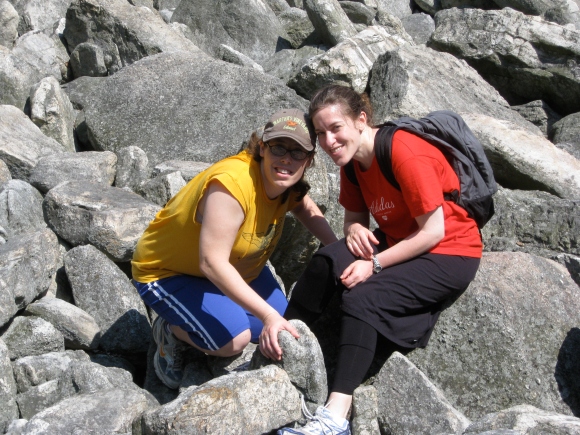 The dynamic duo hiking in Pennsylvania circa 2009 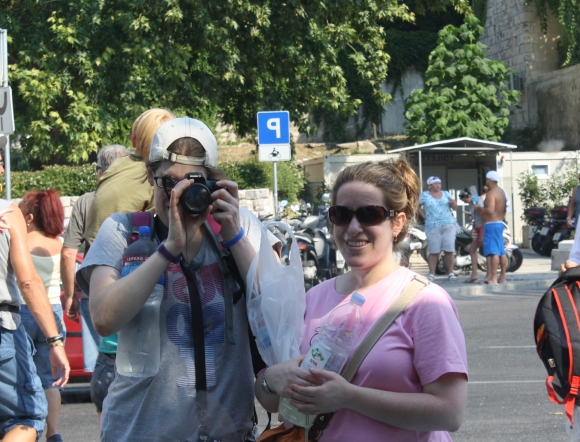 The dynamic duo in Croatia in 2012 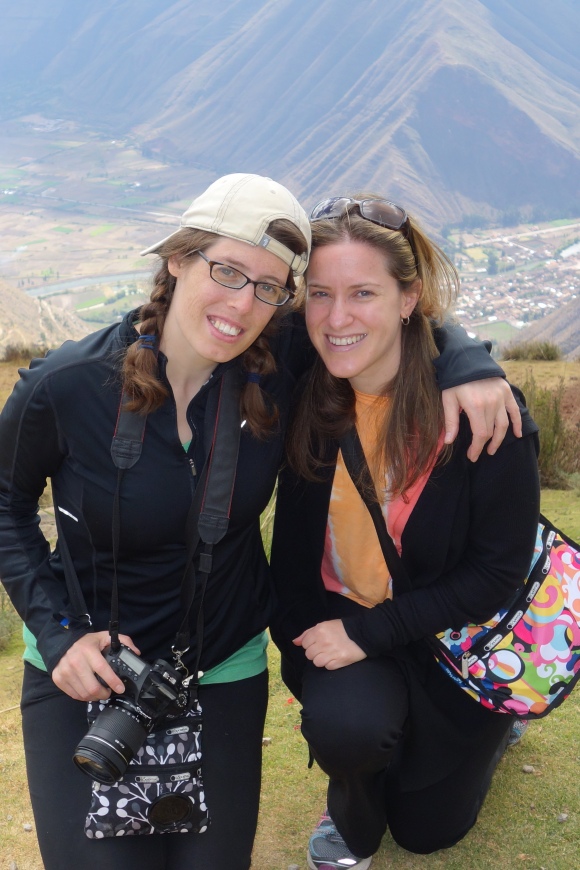 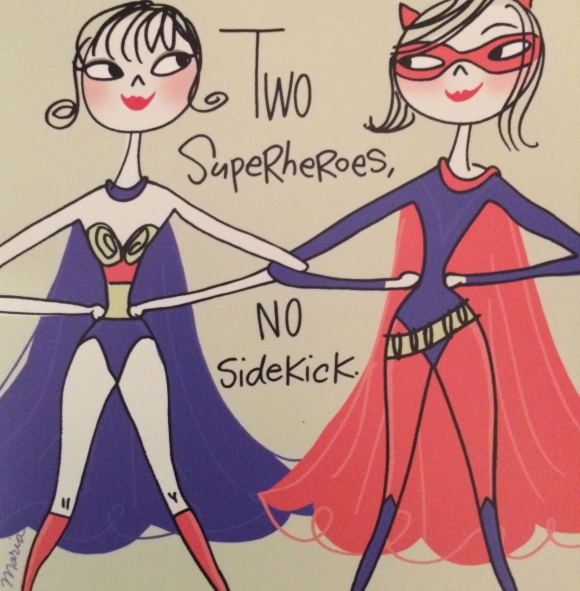 Another Birthday, Another Deep Thought

I’m not a big believer in birthdays. I don’t believe in parties or birthday specific presents. If I want to treat myself to something nice, I shouldn’t have to wait until my birthday. And if you want to buy me a present you should do it any damn day you want. Personally, I think I deserve to be treated nicely all year round. But since I’m officially a year older, it’s a good time to reflect on the year behind me.

Happy birthday to me!

Deep Thoughts on Yoga and Peru

I was lying on my back in the relaxation stage of a yoga class on Friday and the instructor was blabbering on about energy and other yoga lingo I rarely understand. I am usually too busy trying to figure out how the hell my butt is supposed to balance in the air to worry about “finding my heart.” But then he said something that struck me: “The life you’re given is a gift.”

Sure, it’s a cliche, but in that moment, it felt like an epiphany. We only get one life, and it is a gift. Bad shit happens to people everyday. Just open up the newspaper or turn on the TV – or even go on Facebook. That morning, I heard about a man I knew tangentially through work who committed suicide. And so my life is a gift, even if it is not exactly the version I would like.

In a few hours, I board a flight for Peru via Panama. I am excited and apprehensive — excited for the obvious reasons. I am going to Peru! I am going to see Machu Picchu! Apprehensive because after five years of traveling with The Boyfriend, he is not exactly in the picture right now, and he has left a gnawing hole inside my heart that cannot be filled by exciting vacations.

But the life I was given is a gift, and I might as well make the most of it. So here is to traveling to a brand new continent with one of my best friends (I can’t believe we have been friends for 16 years). Here’s to seeing the wonders of the world in style (I am sitting in the business class lounger as I write these words). Here’s to enjoying the small things in life like summer days on my porch and friends that put up with my emotional swings. Here’s to family and a niece who thinks I am the best thing in the world after the iPad (also known as “tap tap!”).

Here is to living life with no regrets.

Things We Have to Look Forward in 2015

I haven’t watched Back to the Future in years and totally forget that Back to the Future 2 takes place in the far distant future, otherwise known as the year …. 2015. So this weekend, I caught up on the things we have to look forward to in 2015: 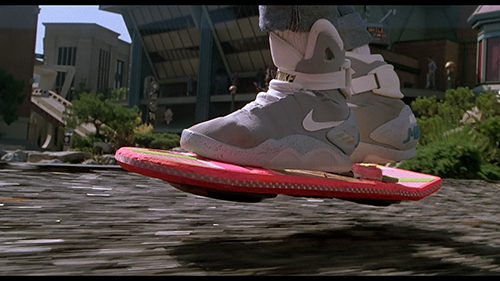 Happy February!  While I have no major trips planned for this month, there are still a number of things I’m looking forward to:

Is there anything more depressing than returning from a great vacation to a cold and dreary January and the prospect of another two months of freezing tempuratures? Probably, but I’m having trouble getting past the two more months of winter and the lack of any big travel plans on the horizon. Have no fear! There are still a number of big (and small) things to look forward this month.

1. New job: I’ll be switching jobs later this month. Here’s to all the adventures and craziness that big life changes inevitably bring. I shall embrace thee.

2. Running: Yeah, I never thought I’d utter such a blasphemous statement, but the downside of vacation is that I always come back feeling like a female version of the Pillsberry Dough Boy. No matter how many times I vow to use the hotel gym on vacation, it never actually happens. It’ll be nice to start running again and feeling more like a person and less like a dough girl.

3. Charlotte: I’ll be going to Charlotte, NC for work later this month. Granted, it’s not the most exotic destination, but I like exploring new cities.

4. Planning new trips: I love planning trips almost as mich as I love taking them. I’m not sure what our next big trip will look like, but I’m hoping to plan some weekend hiking outings in the spring. Any suggestions for the Northeast?

6. Music: On a similar note, the end of Christmas music on every radio station.