In America, where high speed rail is more of a pipe dream than anything else, I’m used to people gushing over the European rail system. And up until now, I had no complaints. I’ve enjoyed the train from Paris to Brussels, through Holland, and through Spain. But the train ride from Berlin to Prague was a rude awakening.

The standard comfortable train car has two rows of two seats each on either side of the train with an aisle down the middle. Comfort level may range from how cushy the seats are to how much legroom you have, but at a minimum, you only have one person next to you. The Berlin-Prague train featured mini compartments with SIX seats jammed together, with three seats facing the other three. Leg room was non-existent. 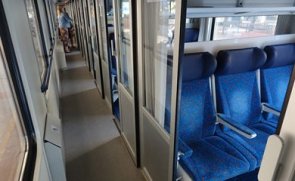 I blame myself for not researching the train ride more, though it never even occurred to me that any long-distance European train would be anything other than the standard two-by-two layout. Had I known what we were dealing with, I would have happily paid extra for first class seats and saved ourselves the four-and-a-half hours in train hell.

The moral of this story: Always check what kind of train you are getting.

One thought on “Prague Part 1: The Worst Train Ride Ever”